At the simulation of (vertically) aerials there are two determining factors: The conductivity and relative permittivity of the ground with high frequency (short soil conductivity). However, exactly these values are, up to now, only raw estimates or taken out of the easiest maps for long-wave transmitter and medium-wave radio stations. Information for the short wave band is not to be found at all. Besides, the ground qualities are dependent very much on the frequency. Hence, I would like to observe these values for a longer period together with the amount of precipitation and temperature myself.

The ground qualities can be measured with the shown procedure easily at several places for all desired frequency. The measurement refers of course only on the uppermost layer in that the two-wire line is introduced. With a rock ground with 40 cm of humus in the flowerbed measured this measurement does not show the average of the surroundings! However, with care at the estimations very useful results are absolutely to be achieved.

At last these values serve for the comparison of two groundplane aerials with raised resonant radials or buried radials in the simulation with NEC4.2 as well as with a detailed measurement.

Transformation of the impedance ZL into impedance Zin by a two-wire line with the (complex) impedance Z0 of the length l.

Here, you can read about an approximation of the fringing effect of a two-wire line.

Practical example of a measurement

With the new vector network analyzer of DG8SAQ an exact analysis is possible for every amateur. 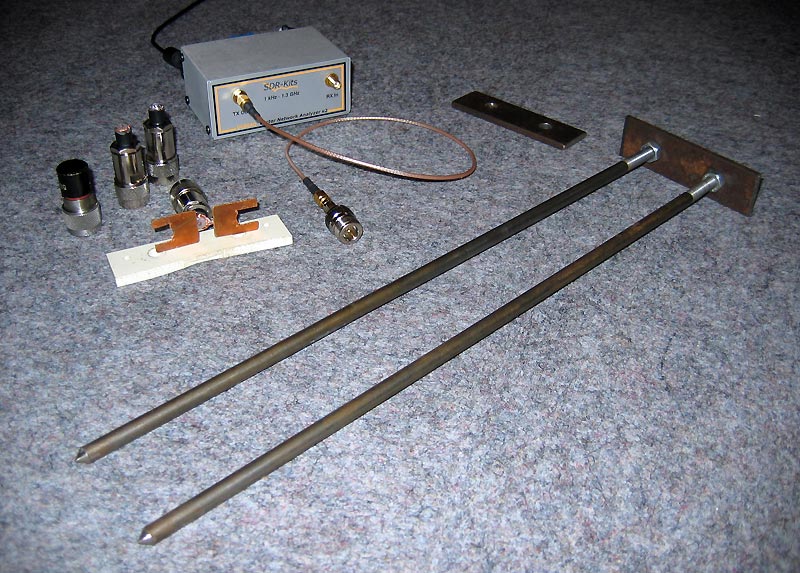 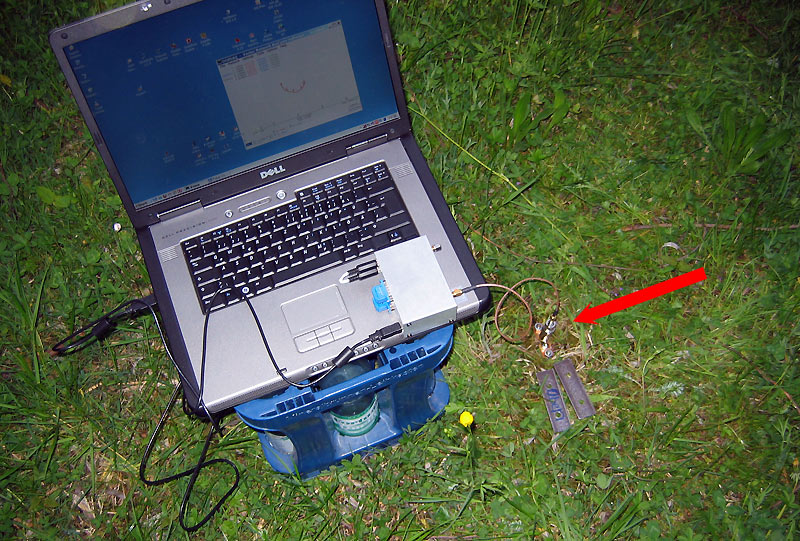 Measurement with laptop, vector network analyzer of DG8SAQ and two-wire line in the ground. 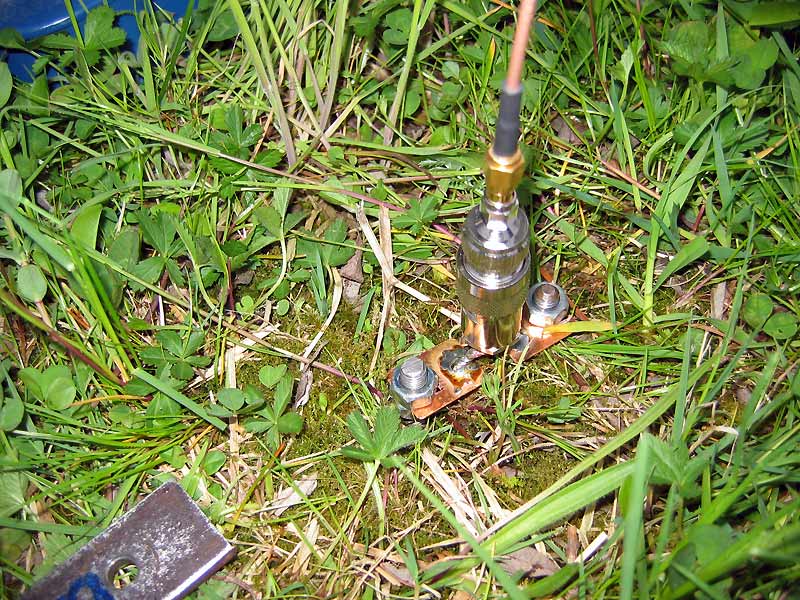 End of the two-wire line in the ground with adapter and coaxial cable.

The two-wire line to be introduced in the ground exists here of two iron rods with 8 mm of diameter and 40-cm length. Both poles have a thread at the upper end and the lower end is sharpened to make easier to press it into the earth.

One of both steel-plates with two holes lie on the ground and serves for stabilization of the distance of the poles. The other record is screwed together at the upper end on nuts. Then, the poles are fastened together like shown in the picture. Then, the rod assembly is to be pressed into the earth. If the two-wire line is completely in the ground both steel-plates are removed and the adapter piece (here with N plug) is screwed on and the measurement is carried out. For the adapter piece two conformist calibrating standards are built to allow a SOL calibration. The poles can be also pulled out of the ground one after the other very easily by using the steel-plate.

The conversion of the measured impedance into the specific permittivity εr
and the specific conductivity σ of the ground is done with a numerical solution. 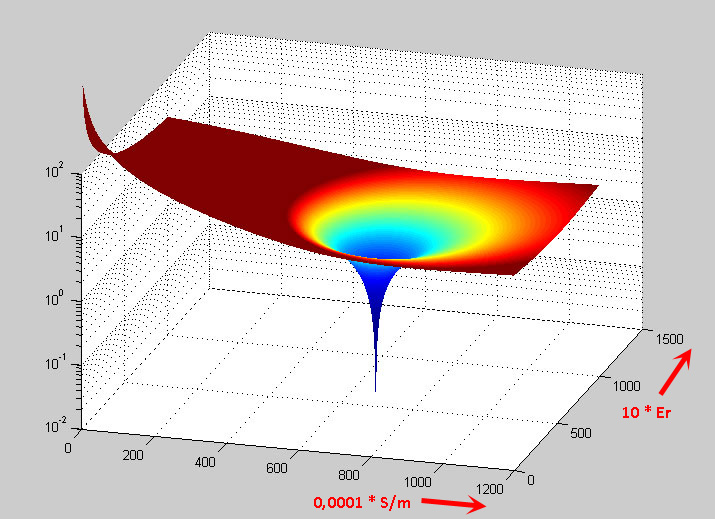 The solution of the equation may result to very nice pictures. In the picture the divergence of all possible solutions is shown. The X and Y axes stretch the level of all possible qualities εr and σ.

The gound characteristic can be calculated with my self-developed programme: 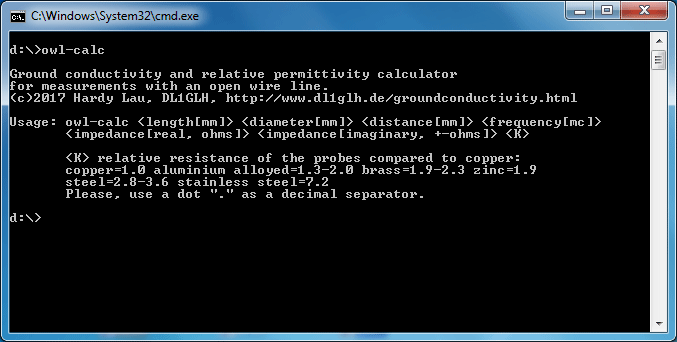 Start of the programme in the windows console without parameters. 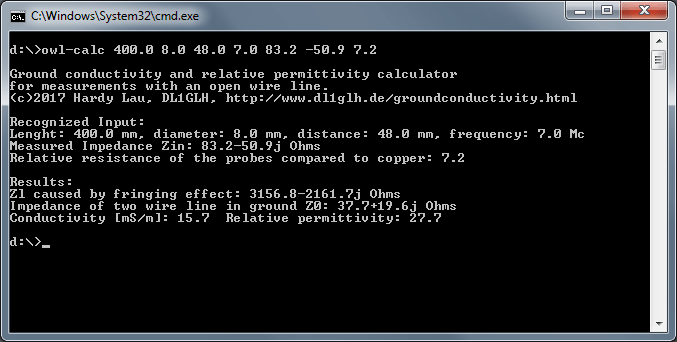 Start of the programme with parameters and the printed result.

Here you can download the programme owl-calc.exe for offline use (Microsoft Windows).

The numerical solution is done with "C" (GCC) and also with MATLAB.

You are also invited to use my online calculator

Values from the literature

As described in the appropriate literature the qualities of, more or less, a thin layer are to be considered. The measured values can be compared to the "classical" results.

The plausibility of the conversion into the earth properties was checked quite several times successfully. With a high conductivity the measurement also occurs in the right depth because the current penetration depth becomes already very small. If necessary the means from several measurements must be taken in the sphere of the aerial up to several λ distance.